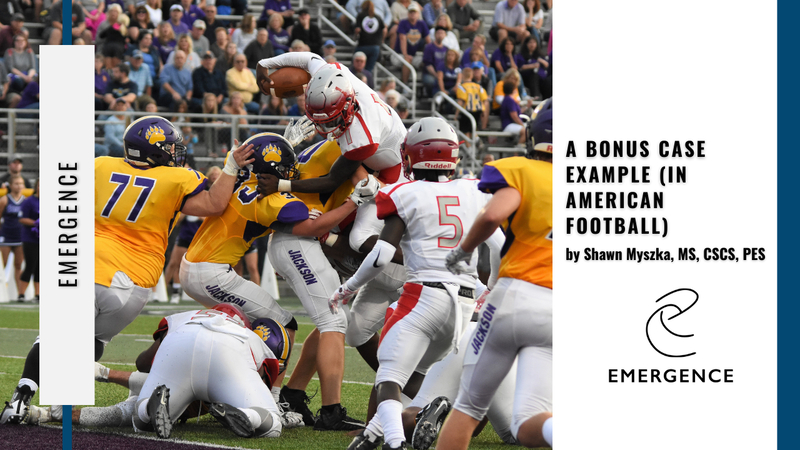 In case you missed it, Tyler Yearby and I, were recently fortunate to lock arms with some wicked smart individuals in the movement skill community, Keith Davids, Will Roberts, and Carl Woods, on the writing of a first-of-its-kind paper entitled, Applying an ecological approach to practice design in American football: some case examples on best practice.

That paper, which we made the financial commitment to making open access, can be found below in its entirety.

Quite frankly, we are grateful that so many people have already interacted with the paper’s contents, and then chosen to follow up and engage with us on their takeaways and reflections.

Undoubtedly, the most popular portion of the entire paper were the two case studies that we offered in the paper – one oriented around the skill adaptation endeavors of a National Football League All-Pro, and the other focusing on training more developmental athletes in the form of high school football players.

With the nature of these concepts (which underpin an ecological dynamics framework), it is easy to get enamored with trying to learn more to increase one’s understanding. However, the true relevance of the adoption of seeing movement skill from an ecological perspective is in how it leads

Thus, we get it – practitioners want to know how to apply these ideas, out on the field, court, track, and rink. And, honestly, that was precisely the reason that Emergence came to be in filling this void that we perceived – there’s a lot of wonderful unpacking of the theories across the literature…we are now starting to see more empirical evidence for the approach…but, there are far fewer practical examples and case studies out there which are valuable in offering people applicable ways forward for their own learning environments.

Because of this, I wanted to share a BONUS case example for you today which was not in the paper. Though it will be brief, it is my hope that it sparks some ideas for the work practitioners out there do with the athletes they work with.

A number of years ago, I had a starting NFL player (a tight end) who was also required to start on the punt cover unit. Though it was foreign to the objectives of his primary position of tight end, playing special teams, he was expected to be adept and skillful at being able to tackle an often scatty and very dynamic player in space; often during local 1v1 dyadic situations. Well, being a tight end (vs. playing linebacker or defensive back who find this movement skill to be rather natural based on past exposure), this was not a movement problem that he had a lot of past experience finding a functional fit for.

When going through his practice film with a fine-toothed comb, counting all the repetitions he got in the spring during Organized Team Activities (OTAs) and Mini-camp, combined with those repetitions where a problem unfolded like this during Training Camp, he and I found that he had gotten ONLY three reps (yes, 3) where he was presented with solving a problem in a one versus one situation in the open field with a punt returner. Additionally, in practice, he was also only allowed to tag off on the ball carrier (instead of attempting “a real tackle” on him).

Well, an actual NFL game on a Sunday can be a very non-forgiving one to play. During the NFL regular season (he played in all 16 games), he faced a similar situation on two separate occasions. Seems like nothing major, right? Only two times?!

However, hold on a second here: within both of those situations, he was not able to coordinate a functional movement solution (this is my fancy way of saying that he did NOT make a tackle or bring down the punt returner). AND…his 10 teammates also did NOT organize a functional movement solution either. AND, in both of those aforementioned situations, the punt returner scored a touchdown on the play.

Thus, even though this particular type of problem didn’t arise very many times during the course of the season (both in-game as well as within practice), it did occur at times of major significance (in a game when a play could’ve been made to save a touchdown) where the player wasn’t able to adequately organize a solution to it mainly based on the lack of exposures and experience leading up to that point.

These reasons are precisely why I believe there is a need for a Movement Skill Acquisition Coach in facilitating emergent movement behavior which is able to be more optimally organized to fit the needs of the game by strategically filling in the gaps of the individual player’s movement toolbox.

In the following off-season, namely in the five weeks leading up to Training Camp, I personally elected to frequently set-up a similar behaving problem to this in our training/movement practice environment for this player by: 1). Having him perform a long distance, more contextual sprint after getting off of an initial block at the line of scrimmage, followed by: 2). Tracking the movement actions of a punt returner (who was actually catching a punt in an undetermined place on the field), followed by: 3). Pursuing the ball-carrying returner in space and attempting to compose a more functional movement solution to meet these respective needs (and ‘bring the PR down’ aka tag-off on him).

Additionally, we would then rotate through different punt returners who all possess various movement characteristics and tendencies. From there, I manipulated the amount of players involved in each respective repetition, as well, both teammates as well as opponents while also changing their places on the field. Thus, not only did it bring more aliveness and representative nature to the practice task design, but it also all played out in highly variable fashions, injected with repetition without repetition.

Having done this type of activity, anywhere from six to 12 reps, during six different instances (i.e. training days), allowed the player to become much more accustomed to the problem dynamics at-hand in these respective situations. It was clear to see a significant increase in his own understanding of his affordances when he found himself in the midst of these respective situations on game day.

That following season he was presented with this 1v1 dyadic situation only two times on an NFL Sunday. However, in these instances, the processes now played out much differently than they had in the past. The outcome which emerged followed suit. In one of these cases, he single-handedly brought the returner down, corralling and tackling the ball carrier. On the other, he walled the returner off and forced him to run laterally east and west to head out of bounds. (NOTE: he was only on the punt coverage team that year during nine games due to the increase in workload on the offensive side of the ball in the other seven games of the season)