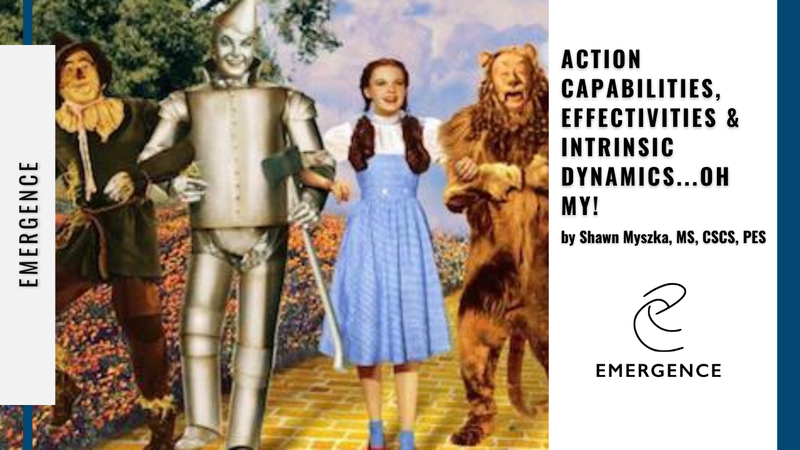 A number of days ago, my buddy, and a good friend of Emergence, Stuart McMillan, of ALTIS (website HERE) tagged myself, along with a number of other ecological approach advocates in a Twitter thread, asking a question which I feel is very important. 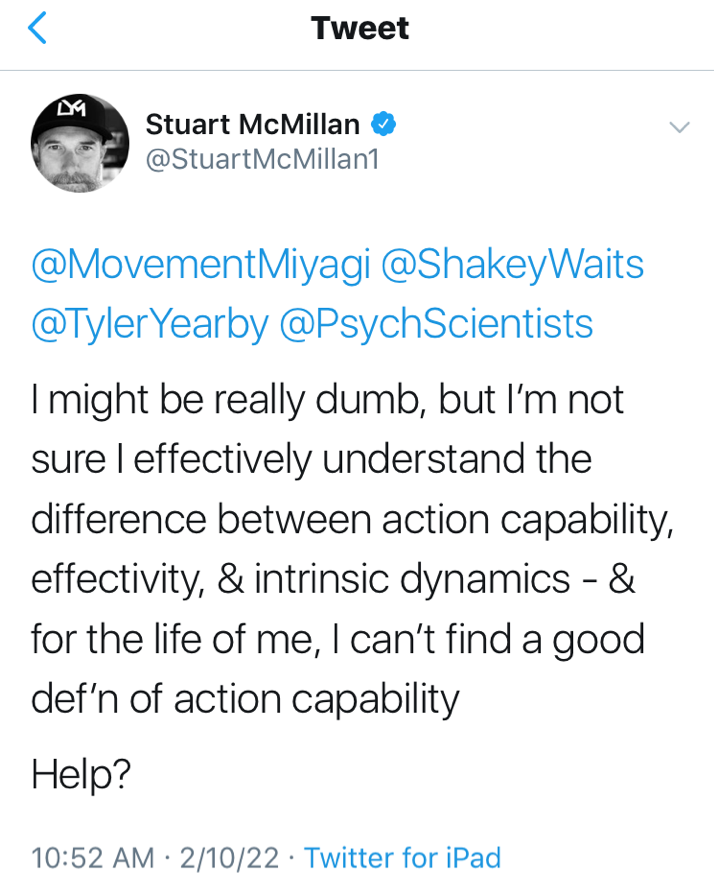 Though there are times that I feel as though Stu can be dumb (I kid, I kid…like I said, we are good buddies), this was one of those times where he certainly was not. This is a topic which is a very important one.

I find that all too often, individuals (both within an ecological framework or otherwise) use different words to describe similar topics. But each word certainly has nuance to it. Thus, it’s important to recognize their distinct nature because how we talk about movement behavior will certainly influence how we view movement behavior…which will most definitely impact how we go about addressing the acquisition (or adaptation) of more skilled movement behavior for our athletes.

Because of this, I wanted to share my Twitter thread response to his question, modified here as a blog post, to allow more movement professionals to have their wheels of thought turn on the topic.

As always, I appreciate Stuart McMillan keeping it real and asking the questions which will require everyone across the community to approach concepts & discussion with care for clarity & comprehension. That said, here are a few things on my mind w/this topic.

Though Stu & I have addressed this on a # of occasions, I will admit that I personally must be better in how I package & articulate my thoughts – on all matters, but esp this one – because I feel as though there are times I’m guilty of not being as clear as need to be.

Ultimately, words matter: we must attempt to be true to what others have said & the work that has been done, while also adding our own authentic flair upon the idea – as long as we test it against those previous definitions & auditing of our thoughts.

For me, the three ideas are interrelated, but there are distinctions. Oftentimes I feel as though people define each w/a highly organism (athlete) centered emphasis. I prefer, even when defining these ‘more’ athlete-centered ideas, to always relate them to the problems in the environment.

Umm, how one is capable of acting in the world (duh!). But w/this, in my opinion, we need to think about ‘acting’ differently than most do – we should think about how one could move within the world – how the processes of perception, intention, & action could integrate in solving the movement problem.

This is about the potential & possible functional states of movement behavioral organization that a system could find itself in. The interaction of constraints then would structure & channel the # of these which are available in the moment.

Button et al (2021) claim this to be “movement capabilities such as strength, power, & agility that enable an IND to move competently.” Honestly, this is a little iffy for me. Yes, effectivities describe physical characteristics one has available (such as strength or power). In fact, Turvey (1992) would assert that effectivities are properties of the animal (athlete), in that they are dispositional states of the individual.

Now, I do think that this one is the most athlete-centric to it but, in my mind, effectivities also should capture context-dependence. Meaning, one can have physical characteristics in bunches, but gotta be functional (purposeful & useful) for the peculiar activity – this is an effectivity for me.

Shawn definition: tendencies in an individual movement system’s authentic way of behaving (solving problems, perceiving & acting) in the world. This could be thought of as the preferred states of the human movement system (or any system really). I relate this to one’s movement skill-set, ‘style’, toolbox, & movement Form of Life.

Thus, we can probably see why these each have been used interchangeably. Like with any field, there are numerous words which may mean ‘similar’ things. Sometimes this is helpful & can add something to the mix, other times not.

In this case, are all three needed? I would say it depends on who we are talking to. As I’ve told Stu before, IMO, effectivity is a word that’s not necessarily needed in most cases and/or overly helpful for many, mostly because of the word itself.

Ultimately, the take home for me is: an environment and it’s peculiar problems can be similar, but the opportunities (affordances) present will be distinct, athlete-to-athlete, because of differences in action capabilities, effectivities, & intrinsic dynamics.

Of course, when Stu posted what he did, numerous individuals across the Twitter-sphere came out of the woodwork to scream across the rooftops that the ideas and terms within ecological dynamics are too hard to decipher and it should be easier to digest…blah, blah, blah.

I will be frank, I honestly think it’s quite silly when people across the field complain about terms & concepts that they are unfamiliar with simply because they are intimidated or don’t want to take the time to understand what they really mean. Stop being crabby, empty your cup, & learn a bit.

In fact, two years ago, I wrote a blog post entitled “Big Words” centered around this very topic, that may be beneficial to revisit at this moment in time. Read that blog post HERE!