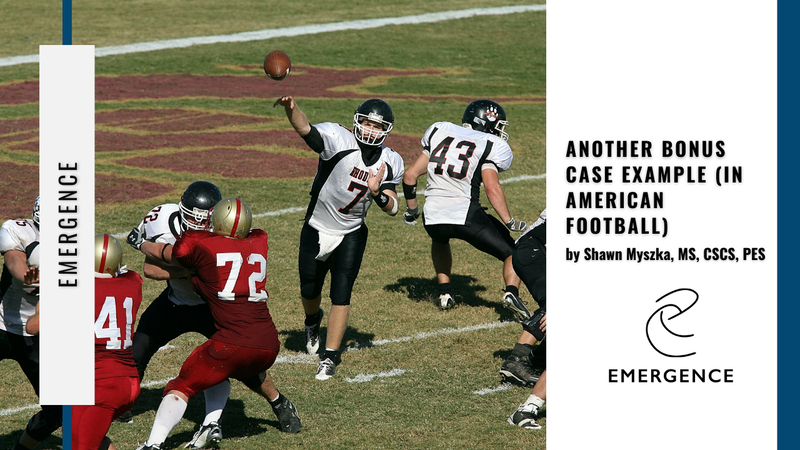 Last week, I wrote a short blog post oriented around a real-life case study of the work that I did with an NFL player who partnered with me a number of years back. Of course, that piece was attempting to build upon a few of the practical examples which we included in the research journal article that Tyler Yearby and I recently published, alongside Keith Davids, Will Roberts, and Carl Woods.

If you haven’t read the article, Applying an ecological approach to practice design in American football: some case examples on best practice, as of yet, I would highly implore you to click this link below and get stuck into it.

Last week’s blog post, much like the journal article itself, has been very well-received up to this point. It seems as though many across the field crave seeing practical examples as to how these contemporary ideas, situated within an ecological dynamics framework, live and breathe within practice design.

Because of this, today, I elected to share yet ANOTHER bonus case example for the community in hopes of assisting practitioners out there with constraint manipulation in their own learning environment.

On this note, it should be stated, the ideas offered in these types of case studies (whether on our blog or in the paper), couldn’t possibly cover the true breadth or depth of the problem-solution dynamics, as well as the full comprehensive nature of the various interactions unfolding in the coalescing of the constraints within the peculiar examples. Instead, they’re only intended to offer a 30,000 foot glimpse into the learning environment. To gain additional access and understanding, one would have had to be present to witness and appreciate how the constraints were manipulated, as well as the resultant movement behavior which emerged, across both the micro and macro timescales.

Five years ago, I had the unique opportunity to partner with a starting NFL quarterback, who had run into a bit of misfortune the year prior, when he suffered a major, career-threatening, non-contact injury (multiple ligaments and dislocation) in the preseason before ever playing in a regular-season game that year (injury occurred during a practice in August). When we initially met in the following April, his progress was relatively slow – but rightfully so – as the damage sustained in the injury was truly significant. Honestly, at times throughout the rehabilitation and return-to-play process, it looked as though he may never regain form and play at a high level in the League again.

Overall, this case reminded me that every injury, and any athlete for that matter, is truly unique and must be taken on a case-by-case basis. In fact, every single day throughout this process for both him and myself, the light was shone on this fact as he was truly required to grind through the adversities and realities of the nonlinear nature of returning to high performance more than any other athlete I’d ever witnessed prior to that point.

Each day, he would rehab with the team for several hours, then go to additional treatment for off-site performance therapy, and finish his day with me, where we would attack his movement skill and the ways he was interacting with the world – “progressing” from doing more general movement skills early on (e.g., various creative animal flows, crawls, rolling and tumbling, variable squatting and lunging), opening degrees of freedom across the system in more global (or “fundamental”) fashions, to then later moving across the continuum to more specific movement skills, attempting to directly solve movement problems which are specific to playing quarterback in the NFL.

Now, I am obviously leaving out quite a few of the specifics which unfolded from April to August, but I don’t want us to get lost in the weeds there. Instead, I wanted to give you a bit of the backstory just to bring a little more context for what will come below, and where we will place our focus in this particular case example. I want you to fast-forward to the following August then, now 12 months removed from the time when he sustained the initial trauma of the injury.

During the month of August, while the rest of the team was deep in the dog days of their annual Training Camp, this quarterback remained embedded in what sometimes felt like the never-ending story of his return-to- play regimen (giving credit where credit is due, the player himself truly remained steadfast in his approach throughout).

September came around, and though he was still unable to practice with the team, things really begin to click for him as he began to move in-context, interacting with the problems of the position, out in our training environment – as we attempted to bring more complexity to the learning environment in the form of more intense, difficult, and representative problems to be solved.

So much so, in fact, that it really became clear that not only was he going to play again soon (when that may have been in doubt at times to those in the outside world), but he had a real chance to be a better version of himself post-injury. Sure, every player says that they are going to come back from injury better…but, unfortunately, the reality is that few have an Adrian Peterson-like story (circa 2012).

However, day-to-day, this particular player seemed to be the real-life, breathing version of direct learning (Michaels & Jacobs, 2007) unfolding in front of my very eyes. Namely, he was gaining an education of attention through him becoming more sensitive to key specifying informational variables to the coordination of his movement (e.g., attunement), as well as an education of intention through deepening his understanding as to how he could appropriately act in various fashions based on the information he was picking up. Finally, he was becoming calibrated to detected information, by closely coupling his movement actions in close relation to the emerging and decaying opportunities to act (e.g., affordances) within the specific problems, based on his constantly changing action capabilities (due specifically to where he was in his rehabilitation).

Though there are many examples I could utilize here to highlight specific movement skills where this direct learning process and associated information-movement coupling was being displayed, let me use a rather pertinent one for him particularly, based on his injury and the nature of playing quarterback in today’s NFL.

As a right handed quarterback, scrambling and moving out of the pocket to one’s left is already a rather challenging endeavor – but this is a movement skill, with the constantly evolving and athletic nature of quarterback play in the league, which has become increasingly relevant. Well, with his injured limb being his left leg (knee in particular), it was imperative that he find various ways of coordinate and organize movement strategies of functionally solving the problems which could constrain or channel his movement in the pocket to his left. This usually would come in the form of pressure from highly athletic edge rushers (off of one and/or both sides), as well as pressure right up the middle in his face from defensive lineman with very bad intentions.

And, of course, when he would break the pocket on such scrambles or roll-out actions, there would be times where the opportunities would present themselves for him to pick up yardage with his feet (I did try to constrain to afford the problem to ask this of him). However, other times, it was more advantageous to make a throw to an open receiver down the field. Some of this was dictated based on the unfolding problem disposition, but also contextual factors like down and distance, location on the field, play called, defenders’ strategies being employed, etc.

To help facilitate this attunement, intentionality, and adaptability in moving skillfully in these fashions, we set-up movement problems, which unfolded in a repetition to repetition fashion (e.g., no two problems being the same), which could contain: a). one to three rushing defensive lineman lined up in various places along the defensive formation, b). one to two wide receivers out running routes – hopefully covered by defensive backs playing various coverage, and c). a free roaming defender who would present a variable and dynamic threat on each rep.

Knowing that he really wasn’t going to get much practice time with the team, and even though we couldn’t make it fully representative, we knew it was imperative to bring as much aliveness as possible to the problems to be solved here to allow him to get back to moving fluidly, creatively, and authentically yet again.

(NOTE: I must admit here, some days we were limited by how many players we could get out on the field and what positions those players were accustomed to playing. Because of this, not all of the players that we got to come to our learning environment were of NFL caliber – however, that didn’t keep us from setting up the problems to be as NFL game-like as possible).

Though it would’ve been great for this story to have a completely movie-like ending to that season, this only partially happened and it was still somewhat anticlimactic (at least in that respective year). He DID return that season, in December, to see action in only one game (and only played in two series with limited success, honestly), as his team found a different starting quarterback that they were on a roll with in that given NFL season. However, I will say that even with any of the other players and successful seasons that I have ever been involved with, in that one game and in those two series, it was easily the most emotional I have ever been in my career – mostly because I knew how much heart, energy, and effort he poured into his return-to-play and performance.

More importantly, this player was able to overcome the injury, and has since played in 43 NFL games (starting in 39 of those). Additionally, and even though statistics don’t tell an entire story, he has thrown for season highs in passing yards, completion percentage, and passing touchdowns post-injury AND ran for more rushing yards, yards per carry, and rushing touchdowns, post-injury!

I sincerely hope that the bonus case studies provided over these past two weeks, along with those offered in the paper itself, are helpful in seeing how ecological dynamics has come to life out in the practice field for myself personally and the athletes I partner with.

It is truly encouraging to see how many within the American football community have chosen to interact with the paper and really engage with the ideas! Because of this, we have elected to schedule a special Movement Meet-up call on Zoom at May 23, 2022 at 7pm CST, to explore the questions and thoughts people from the community have as it relates to the paper itself! So, mark your calendar and plan to lock arms with us, bring your questions, and your notepads, and let’s get further into how an ecological approach looks, feels, and unfolds in American football (and your specific environment)!