Drawing a Line in the Sand: But What if We Are Wrong? 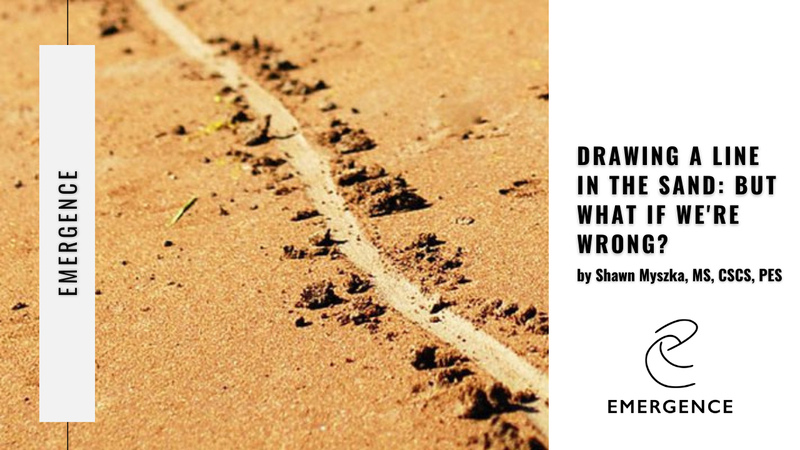 I completely acknowledge that sitting on the fence can feel like an awfully comfortable place to be. After all, this has to be why so many insist on remaining right there, in that place, so often.

Now, it’s one thing to be balanced in one’s perspective or approach. Being balanced, at least at times, such as when we are first trying to gain clarity about a topic or gauging initial usefulness of an idea or method, may prove to be beneficial.

However, the time will come when we must draw a line in the sand, and act in a way to go all in on our beliefs, if we are to truly determine the worth or role of that idea to our craft and our self-actualization.

As the old adage goes, you gotta stand for something or you will fall for anything.

Simply put, the movement skill community currently seems to be in a bit of a flux.

With increased popularity and sharing of ideas from an ecological approach, we have found that more and more people are adopting them within their craft. Yet, many are apprehensive to fully abandon certain methods (i.e., cone drills performed in isolation, agility ladders, rote repetition/blocked practice) which may tremendously contradict the foundation that the ecological approach stands upon.

Thus, we see many practitioners who may pick and choose methods from both theoretical approaches – often out of convenience, and sometimes out of the inability to kill long-standing sacred cows.

One look at social media would show us that so many insist on not disregarding certain theoretical and practical ideas because ‘that’s how we have always done it’, and/or because ‘so and so uses it and they are successful’, and/or because one simply isn’t willing to challenge status quo by going against the grain.

But, there is great benefit in drawing the line in the sand!

Arguably, it may be the only way to truly determine the validity of one’s beliefs and behaviors – to go all-in on something.

Certainly, I am not insinuating that we turn a blind eye to the opinions, thoughts, or ideas of others who may not agree completely with us. They can, and will, occasionally have valuable insight that we could learn from if we are willing to listen…but still put the information they share through our own filter accordingly.

What I’ve found is this: many people aren’t willing to take a stand for what they currently believe because they are too fearful of being wrong.

I can appreciate that, I hate being incorrect about something as much as the next person. Thus, there’s a few recommendations I try to live by, in order to ensure that I am thorough in the inclusion of ideas within my craft.

1. Have a process for taking new ideas for a ride in your mind and, ultimately, in your craft. Personally, I first spend some time sitting with a new idea, often in meditation, to see how deeply it resonates for me. Then, if it’s still on my mind and seems as though it makes some sense or has some applicability to fill some sort of gap in my practice, then I give myself permission to experiment with its inclusion.

2. Continually audit what you are doing, how you’re doing it, and what results you’re getting. If you don’t like what that audit reveals, then be willing to pivot and adapt.

3. Trust yourself and your own intuition. Obviously, we are all going to fall victim, at times, to our own personal biases. However, if you trust yourself and put yourself out there, but end up failing or falling flat on your face, and what was in your own heart, gut, and soul ends up being wrong or incomplete, you will still feel a lot better knowing that you trusted yourself.

Ultimately, if we are wrong, we must be willing to learn from it. But being wrong is nothing more than an opportunity. It doesn’t mean that we are permanently stuck. In fact, being wrong can often be a springboard to revelations and realizations about new ideas and the growth that goes along with it.

And, thing is, if we are right, then taking a stand and drawing a line in the sand earlier, would save oneself of an awful lot of time spent on the practical teeter totter, going back and forth between some ideas which work, and others which we weren’t confident in from the start.