Learning From Those Who Make Us Laugh 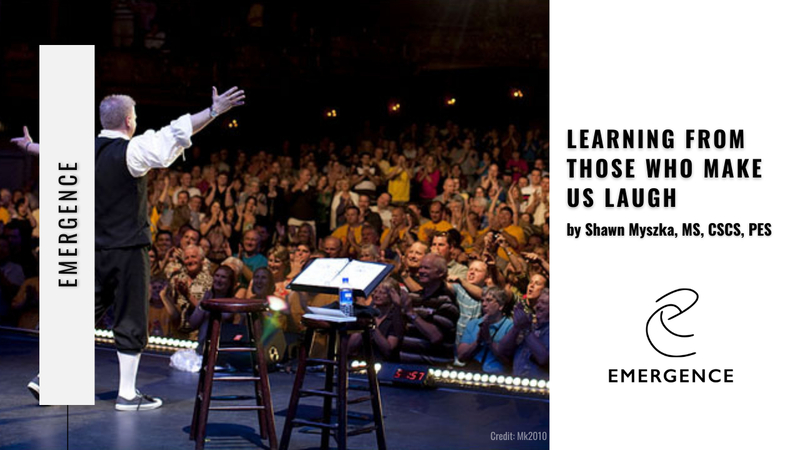 Learning from those who make us laugh

Based on the nature of who I am and what I do, when the NFL regular season is in full swing, I have a hard time truly shutting my mind off of what’s been unfolding on-field for the players that I work with. Meaning, I find myself often being a little too OCD for my own good (or anyone else’s good for that matter).

Though I do believe that achieving the highest levels of impact within my craft involve me embracing my passion and energy towards the game, and it’s this which certainly fuels my behaviors and approaches towards getting closer to the truth, I also have found that I can be the best version of myself if I sometimes attempt to put my mind somewhere else outside of football. I will also admit that this very process is something that must often be forced by myself.

Additionally, if I am being open and transparent, I haven’t completely stumbled upon the right combination of outside influences which allow me to do this.

It seems every year I try something a little different.

A couple of years back, I really took to meditation…but, being that I intensively meditated back when I was an athlete myself, my mind immediately goes into meditating upon the game and my craft.

I remember two years ago I tried watching videos unrelated to sport as a way to spend time separating myself from American football…and what I am trying to do within it.

However, if you know anything about me, you probably realize that I can find connections to my craft in just about anything I watch or anyone I speak to (and as you can guess, this can be both good and bad).

So that brings me to where I am today…what I am trying to do to decompress this season…and actually the lessons I have learned through my attempts that I feel as though I can share with you.

This season, I have elected to start the day by not having my phone around me and instead, while I drink my morning coffee and while hanging out with only my dogs, I thought it may be a good idea to immerse myself in some comedic relief.

Being that I didn’t want to spend too much time in front of a television, I started out just watching snippets of comedy specials on Netflix.

I will admit I have dabbled in watching comedians onstage doing their thing for years – but never as frequently as I have through this season now. Though I am not too funny myself (besides being a tad funny looking of course), I can appreciate the art within the craft of being a comedian – especially being one who is at the very top of their game.

Well, now within the seventh week of this, I have become intrigued by all of that you would expect.

I have watched everything from some modern and sometimes rather raunchy comedy (before cancel culture gets to it, of course). I have also watched those who insist on keeping things clean. I have watched those who are more rehearsed, as well as those who are more improvisational (major props here!). Finally, I have intentionally spent time viewing specials which were recorded more recently as well as those which took place decades ago (sometimes even comparing the sets of those who have been doing it across that time frame, as well, like Eddie Murphy or Jerry Seinfeld).

Lately, I have been watching Jerry Seinfeld’s series entitled Comedians In Cars Getting Coffee. This, in particular, has been a great treat because you essentially have two really authentic people, interacting in a more emergent fashion, about things which they are highly passionate about. If you haven’t seen it, I would highly recommend watching a few episodes and absorbing what you may find useful from the conversations they embark on – even if it’s just for a few laughs. As a high-performance car junkie myself, the show definitely earns a few more points for me there too.

Anyway, while doing all of this, I have also learned some things from these comedians that I feel as though all aspiring craftsmen and craftswomen can do within their art – lessons that we can learn from those who make us laugh.

1. Don’t take yourself so seriously

The best comedians deliver comedy that is funny to them…and often that comedy and the jokes within it, is about them. They don’t care – as they often say in their own individual way – they can find things that are funny that the normal person wouldn’t.

If you look at the very best (sometimes most popular) comedians doing it within any era, you will quickly recognize that they are often those who are willing to go to the very edge of the boundaries and when they find this, they exist there – rarely concerned if they step over them and into places where someone is telling them that they shouldn’t be there.

3. Be willing to evolve yourself with the times

When you watch any great comedian over multiple shows/specials (Dave Chappelle, Chris Rock, Eddie Murphy), you will see that they are constantly adapting. Like a great athlete, the essence and allure of their craft exists in this constant evolution of how they do what they do, as well as the nuances of what they do too.

4. Surround yourself with people who are as passionate about something as you are…and who bring out the best in you

This one coincides with point #8 below too, but on many of these comedy specials, to see how these comedians hang around one another and/or enthusiastically enjoy spending time around one another (like in the Comedians In Cars Getting Coffee TV show mentioned earlier), is really quite refreshing. They want to frequently riff with one another – and they want to interact in meaningful and challenging ways. For they know it is there, that they will be able to not only be themselves (and test out their material too) but they will also be able to become the best version of themselves through the process.

5. It takes exposure and experience over years to be great but it starts with putting yourself out there

This one seems rather obvious, I know – especially with what we all currently believe about chasing skill, mastery, and dexterity in any endeavor. However, when we think about comedy, one may feel as though just because someone is funny cracking a few jokes here and there at a party or in front of their friends means that they will automatically be funny onstage in front of a crowd. Barring just a few rare exceptions, this is simply not the case. It takes commitment and willingness to put yourself out there, over and over, night after night, often working through the struggles and the nonlinear nature that comes with being great at any endeavor.

6. Don’t take forever to get to your punchline

I know what some of you who are accustomed to reading my work or hearing me present may be thinking to yourself when I offer this one up right now! And, I don’t entirely disagree with you either…I need to take my own advice here!

Yet, hearing a skillful comedian surgically set-up a joke and deliver it in a succinct, but also sophisticated, manner is really intriguing to me.

7. There will be hecklers

In any comedy special, it’s not uncommon for the camera crew to span over the crowd to show the responses of people laughing. However, if you watch closely, there are always times where you can see someone in the crowd who appears to be having the worst time of their lives while everyone else is cracking up in laughter.

Meaning, there will always be people who just don’t get what you’re trying to say or your delivery just doesn’t resonate for them. That’s okay – you’re not meant for everyone. If you try to please everyone with what you say, you will probably be violating who you are and what you actually want to say.

Additionally, there will always be people who are there for the singular purpose to try to bring you off your game by going out of their way to disrespect you and your message, deliberately choosing not to laugh, or saying things that are untrue and/or are flat-out low blows in a flamboyant way. Don’t focus on these hecklers and what they represent as they could derail you from achieving greatness.

8. Give others your attention and respect

Hearing the comedians speak about how special other comedians across the circuit is something that was definitely inspiring as an example for myself. But, game respects game, after all. And this is quite apparent when you hear the open admiration that many of these comedians give for some of their peers.

9. Remain attuned and adaptable at all times

Sometimes the jokes you thought were funny at some point, may just seem to fall on deaf ears. Thus, you must remain highly sensitive to what’s getting laughs and when/where you may need to look to flexibly adjust – whether that’s in the moment on your current set, or as you look to better yourself for your next show.

I know, that sounds corny, but it’s true. Comedians may steal from one another a bit in various ways if they see it getting results with the crowd (much like coaches do), but the best have an uncanny ability to express themselves honestly and authentically at all times.

In conclusion, I know that I probably didn’t say anything overly ground-breaking today. However, I do hope that I gave some of you something that may resonate within you and/or some ideas which you can find yourself meditating upon. At the very least, hopefully it will encourage you to go watch a few comedy specials yourself of those who you may find funny or intriguing. After all, maybe the inclusion of a few more daily laughs is just what you need to make you better within your own craft.