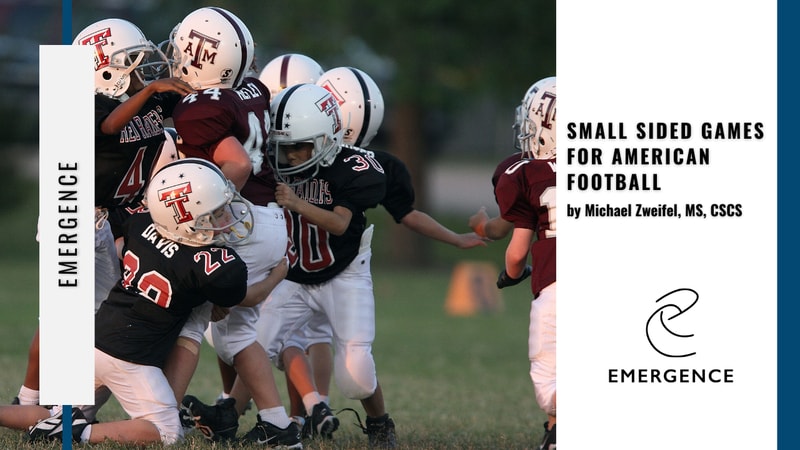 Small-sided games (SSG) have become a well-known practice in coaching circles due to its implementation and success in sports like European football (soccer), rugby and basketball.

Coaches have leaned towards SSG because it provides athletes with opportunities to interact and attune to information rich environments that lead to the adaptive, creative and emergent movement behavior that is a hallmark of all skilled movers (Roberts, Newcombe & Davids, 2019).

Player’s movement behavior is regulated by the information from the environment and the specific task constraints of sport (players, player locations, boundaries, rules, intent) (Davids et al. 2013). This provides rationale why SSG may benefit player and team performance through facilitation of players gaining experience to adapt and organize to the changing information of the environment (Davids et al. 2013).

So even when SSGs don’t fully replicate a full sporting environment, they can be beneficial by providing an information rich environment where players interact with opportunities to exploit space, use teammates, attune to specifying information and gain experience in unpredictable, noisy and dynamic environments.

SSG also can increase the amount of time spent in playful and enjoyable activities by allowing learners to experience simulations of competitive team games (Davids et al. 2013). This is especially important when working with youth athletes, as one of the main goals should be to promote love and enjoyment of the game, not just a pure emphasis on performance.

So while the implementation of SSG has a myriad of benefits and is commonplace in many sports, it has failed to become a prominent practice in American football.

Instead practice revolves around decontextualize drills and unopposed tasks; or with plays done on air or with passive defenders (scout team) in an attempt to achieve “perfect practice” (Passos et al. 2008).

Practice becomes an attempt to perfect rehearsed movements or patterns of play and as a result, coaches make practice predictable instead of the unpredictable and dynamic nature of games.

How do we expect players to become adaptive, creative decision-makers in an environment that attempts to reduce those qualities by scripting everything?

Introducing practice periods of SSG with specific constraint manipulations that aim to promote specific emergent behavior is a great place to start for coaches.

That same idea can be applied for a RB that tends to bounce runs. Instead of telling them to stop bouncing runs or get north (which never seems to work), manipulate the workspace so there is little horizontal space (either by boundaries or positioning of defensive players). These constraints will promote the RBs intention and attention to seek specifying variables that organize his behavior to get vertical.

As these examples demonstrate, manipulations of SSG should be done with specific intentions in place, NOT done in a willy-nilly fashion.

Lastly, an often-overlooked aspect of SSG is it gives athletes ownership. Especially in a sport like football, which has built in breaks between plays, in which coaches imprint their stamp on the game with play calls; SSG gives the players the keys to the car and they get to make decisions/calls on their own.

As a coach, it can be insightful to see what behaviors and decisions emerge because of this. You can see how players grasp spacing, team coordination, game-play concepts, adaptability and creativity.

You can also pick-up on “preferred” behaviors. What do they revert to or rely on in this environment?

This gives you a lot of information on a player’s strengths, preferences, confidence and tendencies. This allows you, as the coach, to better put them in positions and situations that allow for success. I truly feel SSGs can give a coach a better global understanding of what each individual athlete does well/best and can be tremendously beneficial to help play to their strengths.

Provided will be 3 examples of SSG for American football, with what constraints are being applied to the game. Again, constraints are flexible and should be adapted based on the desired behaviors you want to influence.

For a team that uses heavy RPO or PAP, this mesh constraint gives a ton of reps for the QB to interact with the information that may allow for a give/pull action.

The nature of this mesh also encourages the QB to quickly release the ball on a pull, so they’re allowed to self-organize how they solve this problem, rather than repetitive footwork drills.

For the defense, they get a realistic run-pass look and it encourages them to be perceptually attuned to the mesh point and offensive behavior that will drive their movements.

This SSG is a rapid-fire task, in which the offense is only given 15sec between reps. I put together two offenses (2 sets of 2 WRs and a QB) that rotate, while the defense stays in.

You get to see each “team” communicate and their behavior and movement emerge with each other on the fly. With not enough time to huddle and design a play, players must search the space for opportunities that fit, creating a team dynamic.

This is a SSG that is great for coaches to see what players do on their own. How they use hand signals, what concepts they feel confident in, how they handle a time stress (ie play clock running down, 2min offense/defense).

What you’ll quickly find is players adapt to each other and become aware of spacing opportunities, create communication strategies and become comfortable being uncomfortable.

This is also a great way to expose defenses to tempo and create a “conditioning” effect that is much better than running 300y shuttles or gassers. 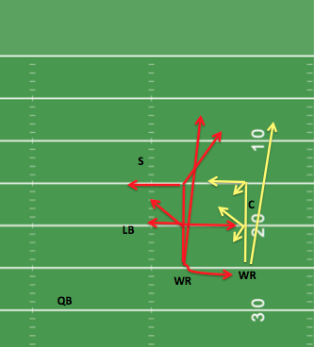 Team that is out goes to defense on change of possession.

For this example, I’m going to create three teams, so players get to play both sides of the ball (You don’t have to do this). This creates a fun environment and can put players in uncomfortable situations playing positions they’re not used to, especially if you’re a two-platoon team.

So, three teams are split into groups of 4, with each team consisting of a QB, a big (OL/DL), a mid (LB/RB/TE) and a skill (WR/DB) player

If a team is on offense, all four players are involved with a center (ineligible), QB and two eligible players aligned however they want.

If a team is on defense, three players are involved (QB sits out), aligning however they want (You can also play with 4 defenders, if you allow the QB to play defense).

The defense has to bring a pressure/blitz (any one of the three defenders). The center attempts to block the blitzer, while the two eligible players go out for passes (or can receive a hand-off or stay in to help block).

For the QB, a blitzer promotes finding the best matchup and getting the ball out quickly. For the skill players, they have 1v1 matchups and must quickly create space by themselves or by using a teammate. Finally with only 3-downs to score and only 2 defenders left in the workspace, this promotes run after the catch and making a defense pay for a blitz.

With the QB not being able to run, it encourages him to keep the play alive while keeping eyes downfield. It also increases exposure to scramble concepts for both the offensive and defensive skill players.

The center has a very open and disadvantaged 1v1 blocking scenario with various degrees of space, angles, and speed of the defensive attack, while the blitzer adapts their pass rush movement based on the information of QB position, where they’re attacking from and how the QB scrambles.

While common practices like skelly (7v7) and inside run could be considered SSGs, these practices haven’t evolved or manipulated to elicit specific outcomes for teams.

Instead, they are practiced in the same manner, in the same workspace, with the same number of players, abiding by the same rules, done day after day. This process has become the “we’ve always done this, every team does this, so we do as well”.