The Eventual Evolution of Ecological Dynamics 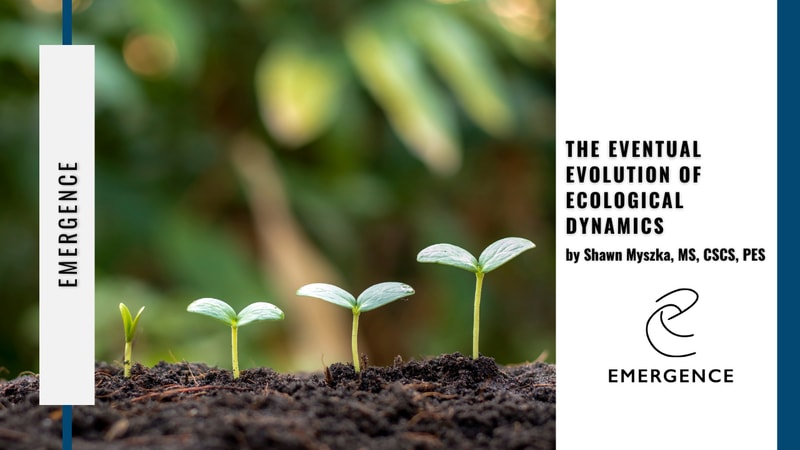 As you may or may not be aware, we recently held the Third Annual Sport Movement Skill Conference (hosted virtually online on May 16th and May 17th). Per usual, so much energy and expertise were shared between both the presenters and delegates alike that then serves as an invigorating experience where we all lock arms around our shared passion of movement behavior in sport. Additionally, the annual event also seems to represent a certain audit of sorts for both myself personally, as well as the community as a whole. What do I mean? Well, as we all share from our own Form of Life, and as we interact with each other around the concepts and ideas pertaining to movement skill acquisition, it’s easy to see that we are still left with many more questions than we have answers (note: sport movement behavior is pretty dang complex, so this is likely still going to be the reality even long after we are all gone). In particular, the SMSC seems to often be a test for where the lens, understanding, and methods contained within an Ecological Dynamics framework currently stands. Meaning, it’s our collective opportunity to ask ourselves: how sufficiently does EcoD assist us in explaining movement behavior in sport contexts and enhance movement skill for sport? You may be asking yourself: “But Shawn, I thought you fully believe in EcoD and what it provides you as a Sport Movement Specialist?!” (If you have purchased any of our products here related to the topic, you are probably asking that question in a louder voice with maybe a few more words intermixed in that quote which I elected to leave out) So, don’t get me wrong: the framework (of EcoD) is the best current model, that makes the most sense for me, in both my personal work with NFL players, as well as in the education of others to potentially assist all Sport Movement Specialists in facilitating more functional movement problem solvers in their respective sport. However, it would be irresponsible, arrogant, and rather ignorant, if I made any claims that EcoD is a foolproof magic bullet which is complete and holds all of the answers. After all, I think we can take the ever-popular quote of George Box to heart a bit here when he said, “All models are wrong, but some are useful.” Quite simply, we should always continually reassess and question our current line of thinking. That’s just being honest and having integrity for finding the truth. Thus, we must try to explain what we can while figuring out what’s still missing (or bad!) with an equal level of vigor. At Emergence, we are not an Ecological Dynamics company (contrary to popular belief). Instead, we are a ‘Movement Skill Education Company.’ We are driven to uncover more of the truth as it pertains to movement behavior and we try our best to remain not overly married to concepts that must fit under an umbrella from one particular theory or framework. That all said though, the way it stands at the moment, it just so happens that we have primarily utilized an Ecological approach as the main vehicle up to this point in order to communicate highly pertinent movement skill-related ideas in the most effective ways that we currently possess. But, the EcoD framework is not without its flaws and we don’t want to be a group who may simply sweep rather obvious points under the rug as if they are not credible. Instead, we want to acknowledge them so more can be done about them! So, if Ecological Dynamics is to mature and evolve more fully in the short-term, here are a handful of areas which we must all do our part (from both science/research and art/application) on coming to grips with: The great part is, many thought leaders within EcoD have started to recognize some of these incomplete areas too and have begun to address them in both research and theory (and ultimately, practical application too). Let’s also face the fact that EcoD, in its marriage between Ecological Psychology and Dynamical Systems Theory, is still somewhat in its infancy (at least relatively speaking) with how its concepts have been tested empirically. Thus, it (and those within this space) should be ripe for growth as we face the above-mentioned challenges. Out of this should emerge the necessary evolution to continue to unpack some of the shortcomings above and try to make a more informed stance on how we all may be able to accurately see through a more complete lens. All in all, we are excited about where Ecological Dynamics is currently at and what the future may hold for it. Equally, it’s energizing to see all of the Sport Movement Specialists who stand together in passion trying to take a positive step forward to more comprehension and understanding of movement behavior while also determining practice methods that are more effective in facilitating advanced functional movement problem solvers, no matter the sport. If these are areas that you’re highly interested in, you’re in luck! We have two educational courses which may be right up your alley. The first, ‘Underpinnings,’ is our flagship course which is our most complete compilation of EcoD content available to-date and is geared for those ready to fully commit to taking the deep dive in. The second, ‘Ecological Dynamics for Dummies,’ was created to be a bite-sized version of ‘Underpinnings’ for those who may be taking their first steps to wade into the Ecological waters. Either way, the future in movement skill is bright and we are grateful to be standing alongside you as we collectively take steps forward. Shawn Myszka Co-Director of Education