The “eye in the sky never lies”…as long as you know what to look for! 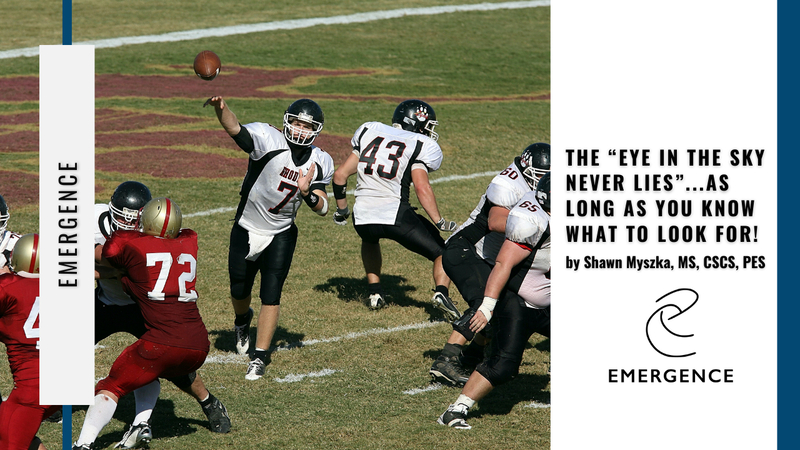 The “eye in the sky never lies”…as long as you know what to look for!

I recently had a friend of mine reach out to converse around a number of his ideas, as well as to discuss some of his questions, regarding the utilization of game and practice film, for both the analysis of the movement skill of players, and to better design practice activities.

This individual, who happens to be a forward-thinking skill acquisition and motor learning nerd (like myself), and works for a professional sports organization, found himself somewhat troubled by the way(s) that film is typically used in his respective sport and the organization he works with.

Namely, it is usually utilized to ensure that certain tactical strategies are being made good on by the players: Are the players carrying out the actions that they are prescribed to, in the way(s) that they are instructed to, based on the particular play call? How is the opponent counteracting that respective strategy in most cases, and how can our team modify what we do tactically in response?

Instead, my friend believes, as do I, that the film could extend far beyond the tactical side of the behavior, and allow us to begin to tell the more holistic movement problem-solving story for the player(s) – in other words, to really dive into the way that the player(s) is interacting with the environment around them and, in particular, answer questions regarding how they are solving competitive performance problems in functional fashions.

Knowing that this is how I have utilized game film for quite some time, he reached out to me and we shared a number of exchanges. These discussions also lit a personal spark to put together a short blog post on the matter, as I feel as though this is an area that many across sport aren’t overly well-versed on and/or may not even be utilizing frequently as part of their craft. Frankly, I find that most within sport and skill acquisition actually possess very little ability to watch what is unfolding in the actual sport and determine the gaps which exist within the player’s movement skill-set. From there, even fewer understand how to use that information to more effectively manipulate constraints in designing a learning environment which can attack those weaknesses.

The truth is, my personal film analysis forms the crux of all of the work that I do with players – both in the preliminary stages, as well as to determine how the emergent behaviors are truly changing over time.

Thus, today, let’s take a look at what my personal film-watching process looks like:

1. When I get a player, I watch literally every snap that they have taken in their NFL career. Yes, every single one…and, that’s before I ever agree to work with the player. If I can also get access to film of them from college too, I will dive into that too…even high school for that matter! All in all, I want to do everything in my power to know what makes their movement skill tick…and how it’s already evolved over time up to this point.

2. I try to watch the film from as many angles as I can. Additionally, I definitely also watch it at various speeds (i.e., full speed, half speed, and slow motion). This latter aspect is vital to being able to slow things down to tell more of the movement problem-solving story more accurately.

3. I look for things related to how they are connecting to, and acting upon, the affordances in the world. With taking a more ecologically-centered approach, I try to really study how the problem-solution dynamics unfold…meaning, trying to understand the interactions and the reciprocal relationship between the dispositional problem and the movement solution which emerge.

Here, I will need to make certain qualitative speculations regarding how they are coordinating their perceptual and cognitive degrees of freedom while also noting key candidate control variables to problem situations that they find themselves in based on their position. As an example, let’s utilize a running back and their evasive agility skill between the tackles; I am looking at things like the interpersonal distance relations between them and the opponent, the speeds both parties are moving at as they approach those interactions, the position/posture of the immediate defender, the position of teammates and the relations such as gaps afforded b/c of them, etc.

I want to gain insight as to how those potential information variables in the perceptual-motor workspace, may specify the affordances present for the performer, and ultimately, determine how they may influence the movement behavior which emerged.

4. Once I am armed with a deeper understanding here, I write a ‘Movement Skill Scouting Report’ for the player. This type of analysis will mainly outline what I found as the most pertinent gaps in their movement skill so they are well aware as to what I feel needs to be worked on if/when we work together. Of course, I also try to highlight good things too so they don’t feel as though I am doing nothing but pointing out what sucks about them!

5. Once all of that is done, I then schedule a meeting to sit down with the player to answer any questions that they may have for me about what I saw and to try to pinpoint specific examples of those gaps and weaknesses (using highlights from the film).

6. Once those steps are all completed, I can now finally begin to utilize that which I found in the analysis to allow me to craft a learning environment day-to-day in practice which will hopefully facilitate enhanced movement problem-solving processes for the player.

Of course, the specifics of that (learning environment) will be highly individualized to the player and the peculiar gaps that they possess (among other contextual factors). However, what I will say is this: this step is precisely why the concept of affordances has been so vital to me.

Overall, I am trying to enhance their movement problem-solving capabilities (through alive movement problems and repetition without repetition of course!). However, this is occurring through the manipulation of constraints to present a landscape of affordances to the player which contains opportunities (affordances) in the landscape of said activity so the player will be required to actively interact with through their perceptual connection, their decision-making, and their actions.

Ultimately, I use the information from the analysis to ‘try to determine’ what affordances in the landscape the player is not currently attuned to, selecting from, or acting upon, for whatever reason. It is then my job, as the Sport Movement Specialist, to get them to explore those affordances and begin to couple their movement behaviors in relation to these more frequently, while in the midst of complex movement problems.

Obviously, you’ve all heard me say before that each of us may need to go a little Bruce Lee on it all. Meaning, it’s up to each of us to ‘use our own experience’ and then ‘absorb what is useful, discard what is not, and add what is uniquely our own’! Thing is, your particular contextual niche may be significantly different from mine so your process will likely need to be highly individualized, as well.

How you go about diving into the film, utilizing it to help you understand how the athletes you work with solve movement problems, and then setting up better learning environments because of it, is entirely up to you. However, one thing is clear: it can be one of the keys to you becoming the best Sport Movement Specialist that you can be!

If some of the ideas which I mentioned in this blog post are unfamiliar to you and you would like to be armed with a deeper understanding of them, I would highly encourage you to consider picking up our initial course UNDERPINNINGS which is jam-packed with deep discussion around the most relevant concepts vital to the craft of being a Sport Movement Specialist.