There Is Harm in Focusing on the Parts 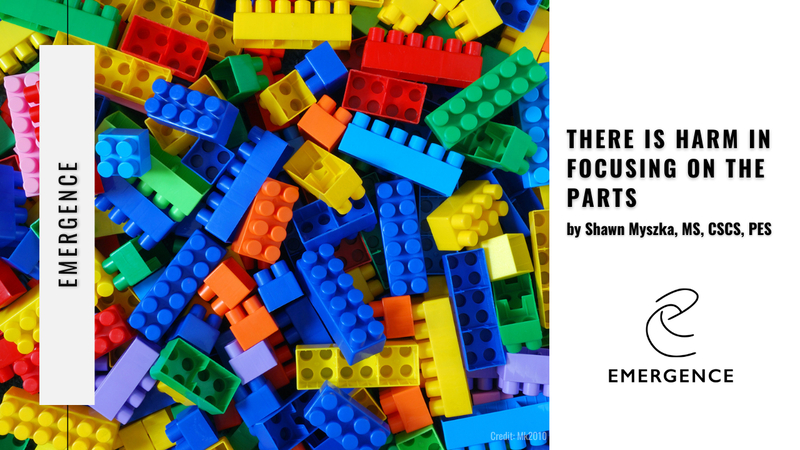 There is not a week that goes by where I don’t have someone, within the sport coaching or movement skill acquisition space, make the claim to me that not only does the breaking of a movement down to its component parts serve as a path towards “cleaning up irregular, erratic, or dysfunctional movement behavior,” but that they can’t possibly see any harm in carrying out movement in this fashion.

Essentially, the crux of their claim is that there is great benefit in addressing some isolated or decontexualized work on movement, often devoid of much of the information which would typically be present and utilized in the guidance or regulation of the movement.

For instance, just a few weeks ago, I had a conversation (okay, it was more of a spirited discussion) with an NFL position coach, whom I challenged to bring more aliveness to the activities he was using during “Indy” (individual periods of position-group work).

Though he could at least somewhat appreciate where I was coming from, he ended up saying to me near the end of the conversation: “well, even if those 15 minutes per day aren’t having the transfer that I think that they are, at least I know that they can’t do any harm.”

However, I believe that there is great harm in focusing on the parts!

Of course, I am an unashamed believer in adopting an ecological approach to view movement behavior, both in understanding how movement is coordinated and controlled, as well as in how we may address the ‘acquisition’ of enhanced skill.

This means that I strongly feel as though we should always investigate movement behavior at the scale of analysis of the athlete-environment relationship.

Practically, numerous other relationships must also then be kept intact during our investigations (and approaches!):

Of course, prioritizing the maintenance of the mutual, reciprocal nature and tight coupling between these respective relations also has tremendous implications for our learning environments.

These beliefs also lead to certain challenges which I would offer towards those who defend their ‘part’ approaches – and those who may think there’s no potential harm in adopting that part approach.

1. Systems thinking would indicate that isolated parts will behave much differently when they are broken away from others, when their (the parts) behavior typically relate to one another to form a greater, integrated whole. Thus, when parts are ‘put back together’ in feeding into the whole, how do we ensure that interventions towards any behavior change (of the part/parts) actually sticks and carries over into the more holistic/global system behavior?

2. If the activity (okay, most of these types of activities actually constitute a ‘drill’), doesn’t contain the deep, rich, and meaningful specifying information sources/variables which will be utilized

In other words, if one changes the problem so significantly, is one even addressing a similar movement problem-solving process any longer? Additionally, there are many times that these types of activities look, feel, and unfold so differently than the movement problem-solution dynamics within the sport, that the athlete may actually be becoming attuned to specifying information (during the drill) that won’t/can’t be utilized in the same fashion in the more complex sport environment. This, to me, is one of the most harmful potential consequences of ‘part’ work.

3. It is intuitively obvious to say that the one thing that we are all limited on is time. In fact, it’s one thing that none of us can ever get back. Thus, it’s precious to each and everyone of us. So, if time is an issue (again, it is, for us all), we must ask ourselves hard questions revolving around why would we ever want to spend a moment of that time (not to mention limited energy resources) breaking down holistic movement into its isolated parts? Plus, even just 15 minutes per practice (as in the NFL coach/practice example offered above) adds up pretty damn quickly!

In conclusion, I don’t want people to mistake that which I am saying here – I am not insinuating that all of the work we ever do needs to be at the highest levels of representative nature. That would be downright overwhelming, overly stressful, and also probably well beyond the challenge point for the athlete. Instead, what I am saying is this: within all of the work that we do, we must ensure that we aim to keep key relationships intact enough, so that the relations between the component parts fit together (such as in the movement problem-solving process) in the fashions which correspond to the context in which we need the skill to shine within – out in the real world of the competitive sport environment.

Do concepts such as ecological dynamics, systems thinking, information-movement coupling, and representative learning intrigue you? If so, may I suggest checking out our original, flagship course, Underpinnings? It’s here that we discuss the ins and outs of these ideas, and how a deeper understanding of these ideas will form the foundations within our learning environment design.