Representative Task Design: We must move beyond cat & mouse and mirroring drills 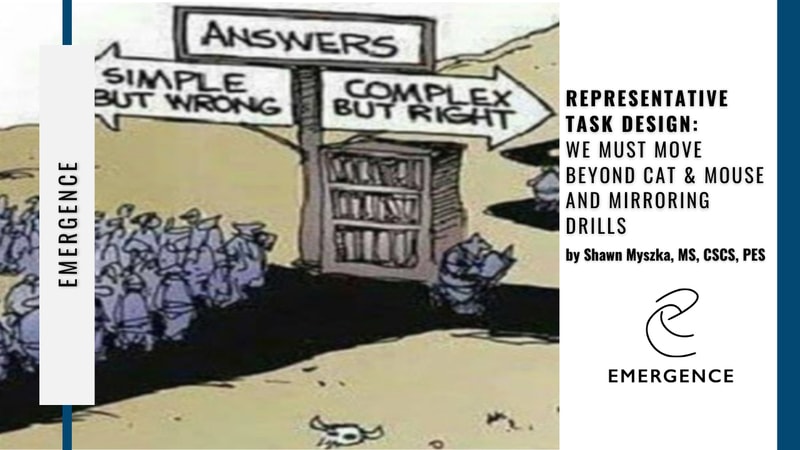 Those are words that are difficult for just about any human to say and I am certainly no exception.

Back at the end of 2012, I had to utter those words to myself regarding my then-obsession on assisting players in achieving the most flawless and pristine of movement skill (note: it was really not movement skill per se…it was all about ‘technique’)…and the methods that I employed in those endeavors (i.e. too many decontextualized ‘drills’, chasing idealized and perfect movement biomechanics, overuse of instructions and cues, etc).

And now, I must say those words, “I was wrong,” once again for the entire movement and performance community on a more recent verbal soapbox blunder of mine from the last number of years.

Why? Most people are aware of my strongly rooted disdain for the use of agility ladders and other pre-planned cone drills in most training environments. Now, if you’re a footwork guru of the world, don’t get too excited here…I am NOT going back on my words of the past in this regard on this ever-slippery topic. Instead, my incorrectness is focused somewhere else…in what could be considered, the “camp” of people that I associate and side with.

In attempts to combat the decontextualized activities that were running rampant across the entire performance community, from 2013 till today, I can be found in various places (podcasts, social media, presentations, etc) stating that what the performance and movement skill acquisition community needs in their training environments are more ‘alive’ problems to be solved within the activities designed. This stance is NOT where I am admitting to be wrong (as we DO need more problem solving activities).

You see though, when many people first hear this recommendation, their apprehensiveness kicks in. Flowing from that shortly thereafter, I will often hear them stating something along the lines of, “But Shawn, I don’t know enough about the perceptual side of the movement equation and/or the information athletes utilize in the problems that they face to design appropriate tasks which will challenge these qualities.”

I should have actually listened to them and aimed to help them get to the bottom of a solution there, but I didn’t. Instead, at least from ‘13-17, I insisted that if these individuals would just start doing some ‘light’, more general movement problem solving activities (such as ‘Cat & Mouse’ or ‘Mirroring’) their athletes would be considerably better for it and the coaches themselves would begin to see more of the light. I felt that they may not need to get more representative than that in order to see positive change in movement skill.

And it’s here that I was wrong. We MUST get to a place in the practice and learning environment where we are MUCH more representative than ‘Cat & Mouse’ and ‘Mirroring’ activities! In fact, I am now afraid that the reliance that I see on those types of activities, and the variations of them, across the performance community may, at times, be doing more harm than good.

Could these activities still be designed effectively to lead to some movement skill enhancement out in the competitive playing arena? Certainly!

Knowing what I do now, we must remember, even small changes to movement problems can often have a huge impact on the movement solution which emerges (the way perceptions, cognition/intentions, and actions are integrated).

So, we must ask ourselves:

I will admit, when it comes to the answers that we currently possess on some of these questions, we still have much further to go. And this quest for clarity is something that drives me and the team at Emergence every single day. But I will also clearly state, I have witnessed athletes who have spent a significant amount of time performing activities like these more general ones (Cat & Mouse and Mirroring), who when they get into the more complex problem in sport, they have become sensitive and connected to information which will not lead them to the most functional of movement problem solving.

If this is a topic that invigorates or excites you (or even confuses you), then you’re in luck! The team at Emergence goes much deeper into all aspects of representative task design in our course, UNDERPINNINGS.

Additionally, we would also encourage you to jump onto the line with us this Wednesday, April 8th, at 1pm CST, for our next Movement Meet-up call. We will be conversing about all things related to representative task design with the movement community and we would encourage you to pull up a seat at the table and unpack it with us.

Also, I would be remiss if I didn’t mention some things that we at Emergence are trying to do to assist you in this growth journey right now, as well. If you are interested in utilizing this time to dive into our content and courses, we want to extend an offer of 25% OFF (till April 15th, 2020). To take us up on this, just use the code “BEADAPTABLE25” when checking out, and you should be good to go!

Here are number of other resources that we would point you to that will take you further down this rabbit hole. All in all, we wish you and yours an abundance of health and wellness through this trying time.