What is highest form of technique? 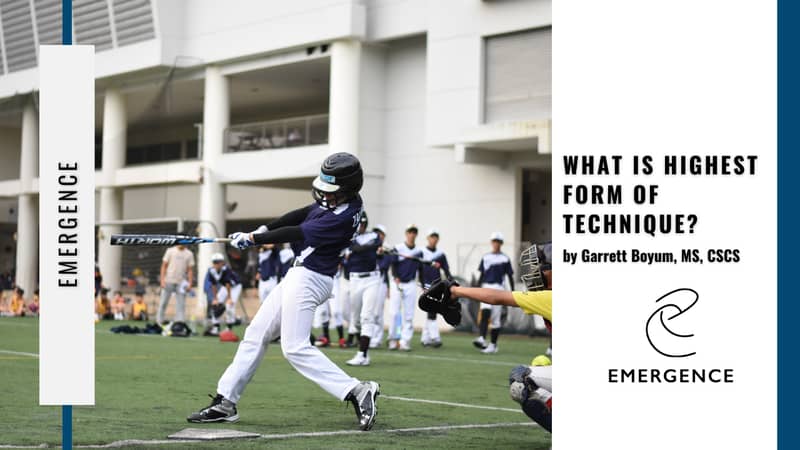 What is the highest form of technique that an athlete should strive to achieve? We have always assumed the answer to that question to be perfect technique. Today, I’d like to challenge that notion by exploring the words of Bruce Lee that emerged out of his dedication to honing his craft as a martial artist.

The sporting world has seemingly ever been enamored with technique, biomechanics, optimal form, and maxims on how one must move for success, future health, and longevity. Yet Bruce Lee, through all his training and study, drew the opposite conclusion. If we focus on the latter part of his comment, “my technique is a result of your technique; my movement is a result of your movement,” gives an inclination to how he concluded that it is better to be “…formless like water” (Bruce Lee, 1971).

Bruce Lee is touching on something vital. Our movement occurs through our connection to the environment. Technique for the sake of technique apart from its reciprocal context misses the mark. It’s equivalent to a conversation where two people are talking past each other. Even if one or both people are executing perfectly articulated thoughts, are they actually having a real conversation with one another? A heavy focus on technique is like thinking the key to being a successful communicator is all about the words we use. However, we as coaches know in order to be effective communicators with our athletes we need to do more than just listen with our ears. To fully understand them we need to pick up on the non-verbal information. Therefore, just like good communication results from being able to pick up and connect with the information from others to form your response the same thing is true about good technique. Being able to pick up and connect with the relevant information in the task environment results in good technique.

Since technique is the result of connecting to relevant information, it is the byproduct not the cause of the movement. Far too often I think we look at technique or biomechanics as the driver or cause of movement and its outcome. As a result, as coaches, we tend to have our athletes chase our idealized technique rather than focusing on how the athlete was connecting to and interacting with the problem. This then brings up the question: what information within that problem’s environment shaped the mechanics and the technique we saw?

To describe it another way, the connection to the information in the task environment coupled with the athlete’s intentions shaped their perception of the task and the subsequent interaction. An athlete’s perception of the task directly shapes the mechanics of their action. A simple example of this would be throwing a ball at varying distances. The athlete’s depth perception along with their intention dictates the mechanics they produce such as their arm slot, torso orientation, back leg flexion, etc. which will all vary to some extent based upon the target distance.

One small way coaches could implement this concept is with their pitchers during their plyoball work. Coaches should have pitchers vary rep to rep or set to set how close they stand to the plyowall. Far too often players stand in the same spot while being too close to the wall which can limit the transferability to other throwing contexts.

That’s not to say that biomechanics doesn’t have explanatory power. Biomechanics are descriptive in nature. They describe how the body moves but not why the human movement system moves the way it does. There is value in that but far too often we lose the forest through the trees when it comes to mechanics missing the context, the environment, and the interactions therein, out of which the mechanics emerged. An overemphasis on technique is like looking at a boiling pot of water on the stove and giving a highly scientifically detailed explanation of why the water is boiling due to the heat and energy exchange going on. Yet that explanation misses why the water was on the stove boiling in the first place which was for example because someone wanted mac & cheese.

While a highly repeatable technique is great for tasks that are very controlled and predictable it is not as useful for dynamic tasks. When you’re dealing with a task that is dynamic (evolving) involving complex systems such as ourselves, the technique needs to be able to adjust to those changes within as well as without it. This implies that the highest technique isn’t some stored motor pattern that has been burned into muscle memory. Rather, it is an adaptable and robust process that allows an athlete to pick up and connect their movements to the nuances of the situation “just as a key that fits a lock” as Bernstein, 1996 would say. Is our goal to create athletes that are keys to only one set of locks or a lock pick that is able to crack a myriad of locks? I would argue the latter.

So, what shapes movement and their corresponding mechanics? We would argue that the constraints placed upon the human movement system produce the technique an athlete displays. When an athlete is able to couple their movement to the specifying information in the task environment the human movement system is constrained, which channels the self-organization process of the movement solution out of which the technique or mechanics emerges to successfully meet the task constraints. By coupling their movement to key information in the task this allows them to become a more adaptable dexterous problem-solver come game time.

When Bruce Lee is talking about the “highest technique is to have no technique,” it is because his technique is the result of the specifying information that he is coupling his movement to. Too often we see technique as this thing that sits outside of the context in which it emerges.

What Bruce Lee is referring to here in this statement is about artificially limiting one’s self through styles, techniques, and systems. An individual’s technique must have the freedom to adapt and adjust to whatever situation they find themselves in. To do this consistently and successfully, one must have the freedom to break and or contradict ideals or dogmas of how one ought to behave (i.e. move). This embodies Bruce Lee’s notion of being “formless like water” or “[having] no technique” frees up the athlete to be in the moment, to more directly connect and interact with the rich information within the movement problem before them.

In practice, we want to break away from the notion of burning into muscle memory an idealized motor pattern as Nikolai Bernstein (1967) put it, “repeating the means of a solution… but in the process of solving this problem again and again” (p. 134). This problem Bernstein refers to is the breadth and width of the problem(s) that exist and emerge within the competitive context.

So, then the highest form technique is when one is able to connect their movement to the specifying information in the problem. Therefore, we believe that it’s imperative we keep perception and action coupled in our practice environments. Train them to “keep ’em coupled,” as Rob Gray of the Perception and Action Podcast would say so that they become attuned, adaptable, and dexterous.

Hopefully, this discussion has caused you to think more deeply about technique and biomechanics when it comes to training and developing your athletes.

To learn more about these ideas and concepts check out one of our offerings such as The Movement Academy or the Sports Movement Skill Conference 2020.